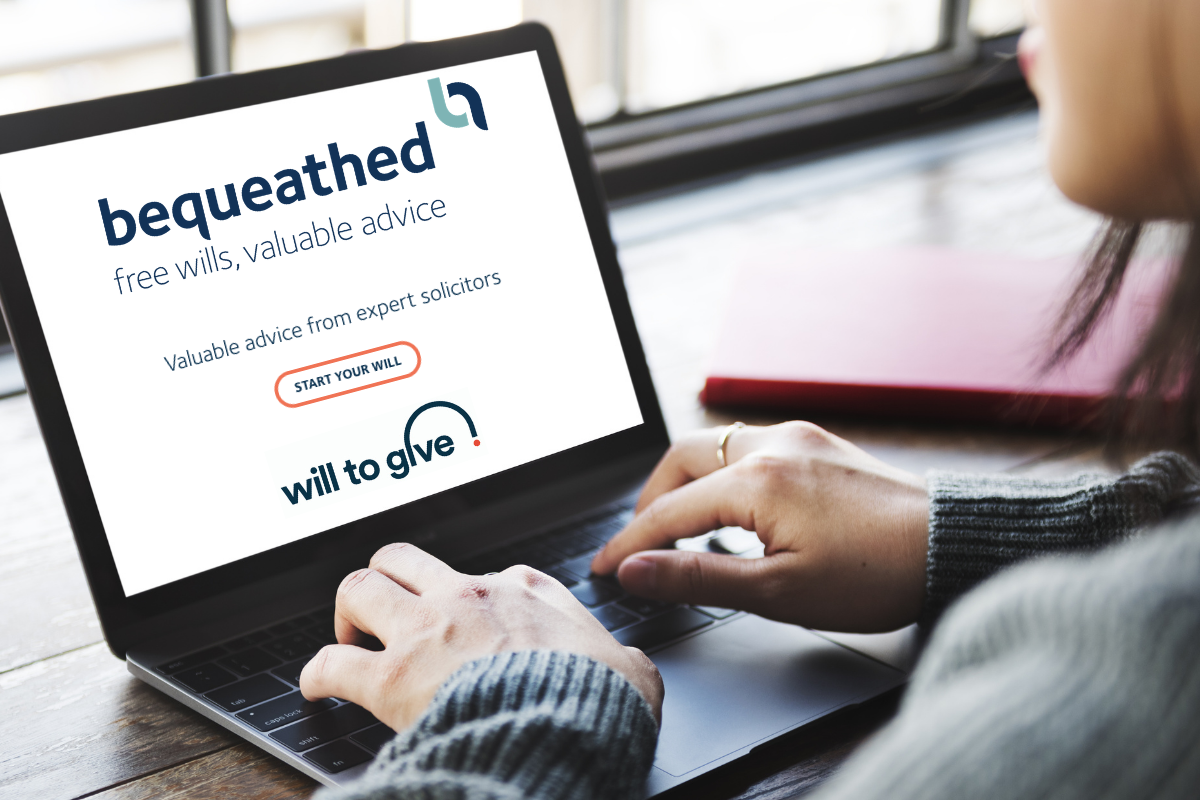 By Will to GiveSeptember 13, 2020No Comments

From this month, people in Northern Ireland will be able to write their Will online.

Will to Give has joined forces with Bequeathed, the online Will-making platform to give people more options in Will-writing, supported by local law firm Cleaver Fulton Rankin.

If you’re new to Will to Give, we are a group of over 60 local charities that encourage Will-writing and charitable gifts in Wills. You can find out more about us here.

Leanne Hamilton, Belfast mum-of-two is one of the first to use the platform. She said:

“As a pension’s professional, I know only too well the importance of future planning and having your financial affairs in order, and as a mum I want to make sure my kids will be looked after exactly as I intended. But saying that, writing my Will was always one of those things I thought I’d get around to eventually. Fast forward 10 years and it embarrassingly remained on my to do list.

“Having an option to prepare my Will online suited me down to the ground. I could work on it in the evenings and at the weekend, and it didn’t take that long at all. It was very straightforward, but I decided to get some additional solicitor advice which was clearly costed at the outset.

“I would encourage anyone who hasn’t a valid Will in place to have a look at this online option with Bequeathed, it really is very simple and straightforward.”

Over half of the UK adult population don’t have a Will. In Northern Ireland the figures are much higher than the national average with nearly 80% of the population not having a valid Will.

Laura Summerbell is Joint Chair of Will to Give, a group of over 60 local charities that encourage Will-writing and charitable gifts in Wills. Laura said:

“The figures in NI for writing a Will are worrying low, however this isn’t surprising, as it isn’t the most pleasant of tasks. It forces you to think about your own mortality, have difficult conversations with family and friends and it can also be perceived at costly. It’s often one of those tasks that remains on the back burner.

“However, the ongoing pandemic and concerns surrounding financial planning, has brought the issues of not having a valid Will to the forefront of many people’s minds. With law firms, Will writing organisations and charities in the UK experiencing a dramatic spike in Will making enquiries over the past few months.

“We’re delighted that this exciting new partnership between Bequeathed, the online Will-making platform and Will to Give supported by local law firm Cleaver Fulton Rankin provides a straight-forward method of preparing your Will from the comfort of your own home and in many cases for free.”

“The importance of making a Will cannot be overstated. This new online option gives people the flexibility of writing their Will at a time that suits them, with the option to save work in progress and complete it over a period of time. It also provides the option to review and keep it up to date.”

“Will to Give and its 60+ charity members are important to the Northern Ireland community and so this is an important milestone in Bequeathed’s development.

Will to Give charities join a growing list of over 100 charity partners who’ve placed their confidence in us. We now look forward to supporting their legacy marketing efforts.”

The online Will-making platform is available now www.bequeathed.org/willtogive with an official launch at the end of September 2020 and it will also provide an opportunity to support local charities by leaving a charitable gift in your Will.

Almost a quarter of the patients cared for by Marie Curie are supported by the income raised from gifts left in Wills and at least six out of 10 RNLI Lifeboat launches are only made possible because of them.