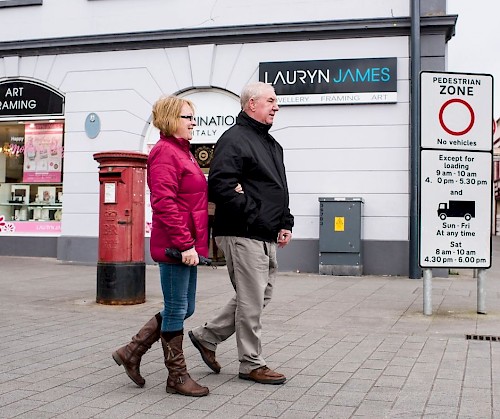 Dementia Action Week runs from the 20th – 26th May.

Research shows that despite almost all of us knowing someone affected by the condition, two-thirds of people living with dementia report feeling isolated and lonely.

More than 20,000 people in Northern Ireland are living with dementia, and this Dementia Action Week, Alzheimer’s Society is taking to streets, events and even livestock markets with the message that you can ‘Ask Us Anything’ about dementia.

People living with dementia have starred in a video to answer questions that are busting myths and showing that people with dementia are still people.

As part of the #AskUsAnything campaign, everyone is urged to share the following video:

In the UK, one person develops dementia every three minutes so small acts of kindness such as calling a relative with dementia, visiting a neighbour or becoming a Dementia Friend, can help towards creating a dementia-friendly generation.

Already there are more than 25,000 Dementia Friends in the province who are helping to lead the conversation and make small changes that make a big difference to people affected by dementia.

It’s a great start, but we need everyone in Northern Ireland to join the conversation.

Throughout the week people with dementia and carers will be taking over Alzheimer’s Society’s social media accounts to answer any questions people want to put to them, including Belfast woman Emily Wilson, who cares for her husband Jim who has Lewy Body Dementia.

Local events right around Northern Ireland throughout Dementia Action Week will help people to start a conversation and unite against dementia.

From reaching out to farmers at the cattle markets to Dementia Friendly Table Tennis in there’s something for everyone.

“Many people are worried about ‘saying the wrong thing’ to someone with dementia, yet a friendly face or listening ear can make the world of difference.

Even in the later stages of dementia when having a conversation might become difficult, keeping in touch can bring feelings of happiness and comfort, especially as the ‘emotional memory’ remains with them long after the memory of the visit may have gone.

“We all have a role in Northern Ireland to help create a dementia-friendly generation, changing the way people think, talk and act about dementia.

There are currently around 2.8 million Dementia Friends in the UK – including more than 25,000 here in Northern Ireland, and 400 dementia-friendly businesses and communities.

“Alzheimer’s Society is determined to make sure no-one with dementia has to face a future alone.

We are here to support anyone affected by dementia and it can start by finding a local event near you this Dementia Action Week. Unite with us now at alzheimers.org.uk/DAW.”

It aims to transform the way the nation thinks, acts and talks about the condition.

By chatting to someone who is a Dementia Friend, taking a look at dementia friendly businesses and communities in Northern Ireland and understanding some of the challenges of writing your Will with a dementia diagnosis.

Will to Give is a unique network of charities working together to encourage people in Northern Ireland to leave a charitable gift in their Will.

For more information about how you can leave a gift in your Will click here.